A pastoralist in Mali manages his flock more efficiently, and a smallholder farmer in Kenya increases his yield. These are two examples of innovation through the use of satellite data. Netherlands Space Office (NSO) will showcase them next week during the World Water Week conference in Stockholm. Within its Geodata for Agriculture and Water Programme, NSO coordinates 23 such projects. 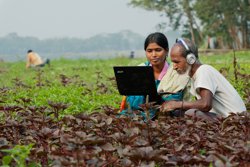 During the World Water Week the African Spatial Delight event will be held on 29 August. ‘At this exciting meeting, water professionals can see how satellite information is helping millions of smallholders in developing countries to make progress’, says NSO employee Elise van Tilborg enthusiastically. ‘We are organising this day together with VIA Water and AfriAlliance as a side event.’ Twelve products taken from 12 projects will be assessed by the participants in an interactive manner. The products are a selection of the mobile applications that provide tailored agricultural information and advice about crops, soils, water and more.

During the African Spatial Delight, two applications which were realised in the scope of the NSO programme Geodata for Agriculture and Water (G4AW) will also be spotlighted. Elise van Tilborg will further explain an application by the FAO: the Water Productivity open-access portal (WaPOR) funded by the Dutch Ministry of Foreign Affairs. ‘Users in Africa, at the FAO and other organisations can obtain free data for assessing the water consumption in agriculture’, she explains.

The G4AW project Sustainable Technology Adaptation for Mali’s Pastoralists (STAMP) demonstrates how pastoralists in Mali optimise their cattle's migratory routes. Via a low-threshold phone-in service, about 60,000 pastoralists can find out where sufficient good food and surface water are available for their cattle as well as the locations of other herds. They also receive current market prices for cattle and cattle feed. This project is also helping to reduce the number of conflicts between pastoralists and farmers. It is expected that by the end of 2018, cattle mortality will have decreased by 10% compared to 2013, production will have risen by at least 10% (meat and milk) and cattle sales will certainly be 10% more profitable. Two of the six partner organisations are Dutch: SNV (Netherlands Development Organisation, project leader) and Hoefsloot Spatial Solutions.

In Southwestern Kenya, the project Crop Monitoring Service (CropMon) helps farmers to increase their yields for the crops coffee, maize, grain and/or sugar cane. In three years’ time, 150,000 farmers will use the information service. After that, the information tools will be extended to include other crops and additional regions. Farmers subscribe to a cheap information service that provides data via text messaging or a mobile app about the current condition of their crop, which growth problems there are or might occur and how these can be tackled. Reliable weather data is crucial for determining the right time to sow, weed and harvest. Many farmers are already using the service and report a better crop development. Four Kenyan and four Dutch companies are participating in CropMon. The Dutch companies are SoilCares Research (project leader), NEO, Springg and Weather Impact. 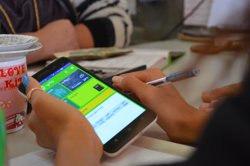 Within the G4AW programme, NSO coordinates 23 projects in 14 countries (Africa and Asia). These projects increase the income and production of farmers, fishers and pastoralists in a way that benefits the sustainable development of these countries. The programme counteracts threats due to population growth and climate change and is part of the Netherlands’ contribution to the United Nations’ Sustainable Development Goals aimed at eradicating hunger and water scarcity. NSO is realising the G4AW programme on behalf of the Dutch Ministry of Foreign Affairs, which funds about 65% of the project costs of circa 95 million euros. Elise van Tilborg emphasises: ‘The partnerships also include local organisations, which increases the likelihood that the products will remain in use when the project has ended. In my opinion, this is what makes the project so fantastic and strong.’