In today's world, the combination of security and earth observation satellites might bring to mind a military context, such as monitoring troop movements. However, other services that use satellite imagery to help prevent thirst, hunger and violence are just as innovative. In the daily lives of pastoralists in the Sahel region, these services can make the difference between finding water and grass for their cattle on time - or not. This is even done in a way that prevents bloody conflicts with farmers who do not want herds of cattle traversing their lands. 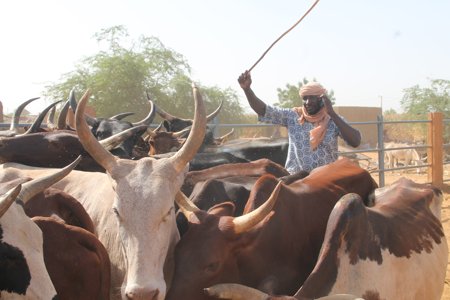 In the Sahel region, both the temperature and the frequency and severity of erosive rainstorms are rising. The United Nations estimate that 80% of the world's agricultural land, which provides sustenance for circa fifty million people, has deteriorated. Among other things, this development forces pastoralists to change their routes. For centuries, they made agreements with farmers about the use of land during the different seasons, but that approach is losing its effectiveness. Various circumstances lead to frustration and people getting in each other's way. Every year, thousands of people die in conflicts between farmers and pastoralists that result from the increasing scarcity of water and usable land. The Dutch Geodata for Agriculture and Water (G4AW) programme presents solutions to these problems by utilising satellite data.

In the past, pastoralists used to send out a scout on a motorbike or camel to search for food for their livestock. These days, they have a simple mobile phone that they can use to contact a call centre or receive a text message that tells them - immediately and in their own language – where to go to find sufficient water and food if they leave that day. At the same time, the pastoralists are told where they might cross onto other farmers’ agricultural lands, so they can avoid these areas if they want. As a result, the risk of livestock deaths and human casualties has dropped significantly, because pastoralists can make their journeys - which are often hundreds of kilometres long because of the effects of climate change - safely and in a timely manner.

Calibrating with local expertise
It is no surprise, then, that circa 40,000 pastoralists in Burkina Faso have joined the G4AW project MODHEM (Mobile Data for Moving Herd Management) in only a short period of time. In Mali, the G4AW project STAMP (Sustainable Technology Adaptation for Mali's Pastoralists) connects circa 60,000 pastoralists to a call centre via their mobile phones. The necessary satellite technology is provided by Dutch companies; Satelligence does so for the MODHEM project and Hoefsloot Spatial Solutions (HSS) for STAMP. The STAMP project involves the use of various sensors in space, primarily from the European satellite earth observation programme Copernicus. HSS has perfected the resolution for this purpose: pastoralists have access to daily information about the quality of biomass and the availability of surface water for areas that measure just ten by ten metres. Director Peter Hoefsloot lived in Africa for many years, including in the Sahel region. “I love nothing more than taking part in projects that make the region more peaceful and safer. Our added value is substantial, especially now that we can combine it with the expertise of our local partners.”

He is mainly referring to the Malian NGO Tassaght, which adds information services regarding e.g. market prices for cattle and feed and the quality of grassland. They are working with a team of pastoralists who combine their local experiences and observations with the satellite data. For example: satellite images might show a new source of water after a period of rain, but if local pastoralists know from experience that this spring usually dries up after five days or so, the satellite information can be calibrated accordingly. Partly as a result of this approach, 98% of its users praise the reliability of the service and intend to keep using it. They pay a low subscription fee, but their milk production has gone up by almost 10%, while the mortality rate of their cattle has dropped significantly. “They can also keep the situation under control for longer,” Hoefsloot adds.

From project to business

In other words, safety and water are two sides of the same coin in the Sahel region. Lis Mullin Bernhardt, fresh water expert at the United Nations, emphasises the value of the STAMP project, especially with regard to water. “Projects like this one are an important addition to the UN's own projects when it comes to managing fresh water ecosystems and providing aid to communities that are affected by severe droughts. We see satellite imagery as a powerful tool.” From 2019, STAMP+ will be operational in more Malian regions. The continued project has the ambition to register 45,000 new users in 2020. What started back in 2015 as a project that was more than 70% dependent on subsidies from the Netherlands Space Office as part of the G4AW programme has since embarked on the road towards more financial independence with the brand name GARBAL. By the end of 2021, the business case must be sufficiently developed to become self-sustaining. For now, the project relies on private and public support because of the unusual safety risks present in several of the regions involved in the project. SNV (Netherlands Development Organisation) has partnered with Orange Mali, a global provider of mobile telephony services. In Burkina Faso, the sister project will continue under the banner of MODHEM+. Once again, the project’s expansion and increased independence will help strengthen the business case. In January of 2020, Orange Burkina signed the contract to establish the brand name GARBAL in Burkina Faso as well. “In projects like these, there are only winners. No party profits at the expense of another,” concludes Adri Bakker, project advisor at the Netherlands Space Office.

The Geodata for Agriculture and Water programme is an initiative of the Netherlands Ministry of Foreign Affairs and executed by the Netherlands Space Office. Since the programme's start in 2015, more than one million small-scale farmers and pastoralists have made use of satellite information services via twenty-five projects in fifteen African and Asian countries.