Information on Geodata for Agriculture and Water (G4AW) is exchanged not only in the Netherlands. To share knowledge with (potential) local project partners and discuss experiences, the NSO recently held two meetings in South East Asia, which attracted a lot of participants. The region currently hosts 11 G4AW projects. The participants all agreed the meetings were very useful, providing new insights to further improve the service in the years ahead. Moreover, the support of the Dutch embassies in the region is considered particularly valuable. 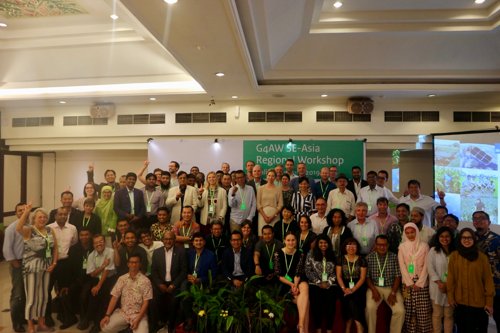 The Netherlands Space Office (NSO) and ICCO (the Dutch Interchurch Organisation for Development Cooperation) organised a two-day event on Bali (Indonesia) to assess the possibilities for cooperation and knowledge sharing between the G4AW projects in South East Asia. About 84 persons – stakeholders from all projects – took part in this G4AW SE Asia Regional Workshop. During a second meeting, organised in Singapore in collaboration with GrowAsia, 120 companies and investors from the agricultural sector attended a morning session, where they found out about the (new) possibilities of G4AW. At this event, Space for Agriculture in SE Asia, the focus was on information transfer about the services developed and the underlying business models. “The participants felt sharing experiences was very useful. These two events also gave us an even better view of what is going well and which points deserve further attention,” says Ruud Grim, G4AW Project Coordinator.

From project to business

It is good to know that the Dutch embassies in the region are generally considered well-informed, supportive and approachable. “Here, the focus is on safeguarding the interests of the farmers, food security and long-term employment.” And that is ideal, because the targeted improvements are not always that straightforward to achieve. “The experiences in this region show which type of businesses can benefit the most from the services we facilitate. How can we optimise the chain in such a way that every link in the chain starts the three-year project period with the right expectations, but also that there is a clear view of that full chain at the end of the project? A project organisation must transform into a business: the sooner an entrepreneur takes the helm, the better. According to the participants in the workshop, the short three-year project period can however be a challenge if all project partners have different interests and consequently choose a different focus in the decision-making process.

Once ‘farmer groups’ and regional agricultural schools became involved, quite a few projects saw the convergence process speed up, particularly with the end users, who form anything but a homogeneous group. In some cases, experiences with interactive call centres were also labelled as positive. “Communication calls for more policies than those currently in place, not so much to optimise contacts with end users, because 70% of them do not own a smartphone, but rather with their children, who do.” We should also take stock of the fact that many women are active in agriculture, and they are often the end users of the G4AW services. And how can we involve youngsters in all of these developments?” Grim pulls up his sleeves and concludes, with a look of satisfaction on his face, “These are just a few of the many things all partners will concretely be focusing on in the near future.”

Ruud Grim is Senior Advisor with the Netherlands Space Office (NSO), which is carrying out the Geodata for Agriculture and Water (G4AW) programme on behalf of the Ministry of Foreign Affairs. The G4AW programme promotes sustainable improvement of the food supply and efficient use of water in developing countries through the application of satellite data. The programme is based on partnerships with for-profit and non-profit organisations.